A Rock Fell on the Moon

Travel back to Elsa and the Yukon’s silver mining heyday of the 1960s as Alicia Priest pieces together the story of her father’s involvement in the Great Yukon Silver Ore Heist.

Once a booming mining town, Elsa is the Yukon setting for Alicia’s autobiographical true crime memoir. Her father, Gerald Priest, worked as an talented assayer until he was accused of stealing 70 tons of precious silver ore. We follow Alicia’s childhood in Elsa, the night of the crime, and the after-effects of her father’s trials in this real-life family drama. 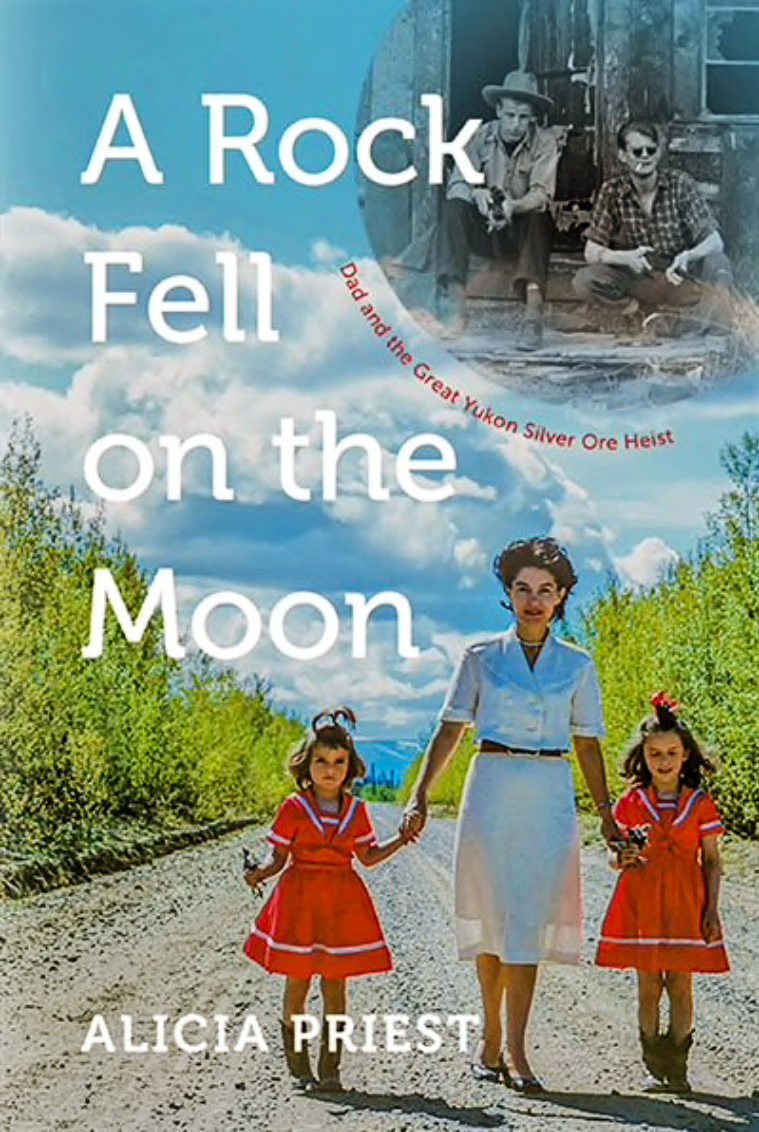 Get a snapshot of A Rock Fell on the Moon and learn more about modern-day Elsa and Keno City with Keno Mining Museum's curator, Amber Smith.

Know before you go: travel guidelines for visitors entering the Yukon are currently in place. Learn more.

Silver, silver everywhere but not a nugget to spare

In 1963, Gerald Priest was accused and later convicted of stealing 70 tons of silver ore from his employer United Keno Hill Mines (UKHM), but did he do it?

With the lure of good pay and a prosperous future Gerald, a talented mining assayer, moved to the Yukon with his wife and two daughters. Elsa was a thriving community and silver metropolis back in its day that was built especially for UKHM employees. But beneath the surface Gerald had a secret, hidden out of sight.

In 1989, the mine closed down and the town of 400 people was abruptly abandoned. One of the last remains is the Elsa school, still visible from the Silver Trail highway. But the legacy of the mine lives on in spirit. And you can still get a feel for the place when you visit today.

Begin your journey at Stewart Crossing and follow old artifacts to where the roads end and the vast mining valleys begin. Dig a bit deeper at the Keno Mining Museum and speak to the locals who could shed some light on the Silver Heist mystery.

For stone seekers on the hunt for a souvenir, there are plenty of Yukon spots where you can try your luck. A hidden gem in Whitehorse is the local Rock Shop. Take a peek because you never know — that smooth shiny purchase could be sourced from the Keno Mines, or from Gerald’s personal Moon claim. On the lookout for the Moon

Alicia’s childhood in Elsa was filled with wonderful outdoor memories. Growing up in a small town surrounded by nature, weekends were spent camping, canoeing the Stewart River and boating on Mayo Lake.

And if you come to visit, you try out the Yukoner outdoor lifestyle for yourself. Enjoy a swim at Five Mile Lake. Or, visit the Alpine Interpretive Centre in Keno for trail advice that will take you across old mining tracks.

Somewhere over the hills, Gerald’s Moon mining claim lies still. With so much terrain and just a toboggan on hand to carry tons of silver ore, you can’t help but wonder...was his skidoo story really true? A land not for the foolhardy

As the appeals and re-trials continued over the years, the prosecution switched their tactics and began to question the feasibility of Gerald’s story. Transporting tons of silver from the Moon claim by snowmobile and toboggan in the frigid winter evenings was no easy feat. Lawyers Molson and Trainer flew up to trace Gerald’s journey and experience the terrain for themselves. Upon landing at Mayo Airport and stepping foot in the Yukon for the first time, they described it as “just a sea of white.”

Inside a trustworthy car, one that could handle the -40 temperatures, they soon discovered they would need more than a suit and tie to tackle winter out in the mining camps.

Mayo, situated along the Silver Trail, is home to the hottest and coldest temperatures recorded in the Yukon. If you are here to experience the wonders of winter, don’t find yourself like our city lawyers. Before you arrive, prep your gear and read up on some tips from Yukoners so you can fully enjoy the magic of the Yukon, whatever the season. Government of Yukon
Get your winter gear
05 HIGHLIGHT

Before Alicia wrote her memoir, records of the heist were told in scattered accounts in a handful of history books and lost to the basements of the RCMP and courtroom storage rooms. Now that you've heard the full story, are you satisfied with the conclusion?